I’ll admit that expectations were low. I’d visited Portugal many times, but avoided the Algarve, believing it to be over-touristed and lacking in anything cultural. Oh, how I was wrong!

Faro is a compact, coastal town with typically Mediterranean paved streets winding towards the sea. On our approach, we were bemused by the amount of motorbikes on the roads and as we sat in the apartment, the roar of motorbikes echoed through the dusk. Turns out there was a huge motorbike festival on, which meant the bars and restaurants were heaving. Everywhere it was possible to park a bike, there was an impressive motorbike – wandering around them was a spectacle in itself! On the waterfront, they even had a miniature motorbike exhibition, displaying old racing bikes through the ages. 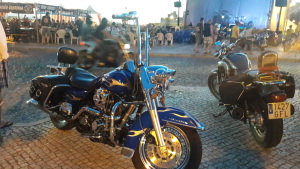 Perhaps it was due to the bike festival, or maybe because it was late July, but the nightlife was extremely lively – lots of groups of friends and families sitting outside the bars serenaded by buskers. Despite the crowds, it felt safe, even when wandering through the dimly lit back streets.

The old part of Faro is slightly away from the modernised commercial part of town, entered through an ancient gateway and a pleasant wander through narrow cobbled streets past white-washed buildings and across quiet tree-lined squares. Every turn seems to lead onto another tiny little square, but what we were after was the harbour – and the boats to Ilha Deserta, a stretch of shoreline out on the lagoon. After a 40 minute boat journey, we were deposited on a small island – the only sign of habitation an ecologically-friendly cafe with a boardwalk down onto the shore. For a Saturday in July, it was relatively peaceful. Not quite deserted, but as we walked further towards the tip, a good hour long walk, the only sounds were those of the seagulls as they squawked and swooped, warning us not to come any closer. A wooden walkway follows the coast on the other side, crossing the dunes from the beach and it’s a lovely spot to look out across the lagoon back towards Faro. Definitely worth a visit to get away from the hustle and bustle of the busy town. 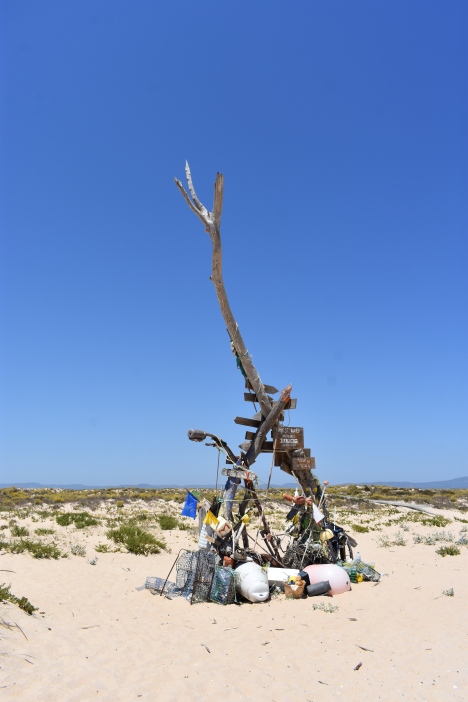 One thing that Faro does offer in abundance is drinking spots to look out to sea and watching the sunset from O Castelo in the old town was a particular highlight. Gazing out to sea as the light shift and changes over the lagoon was spectacular and it was also interesting to watch all the action at the nearby airport as planes full of holiday-makers circled overhead. 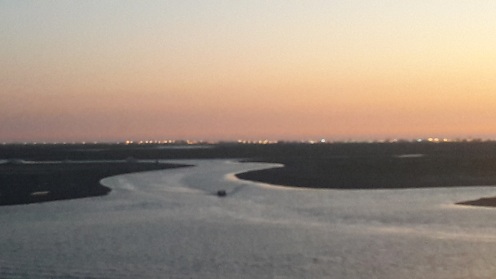